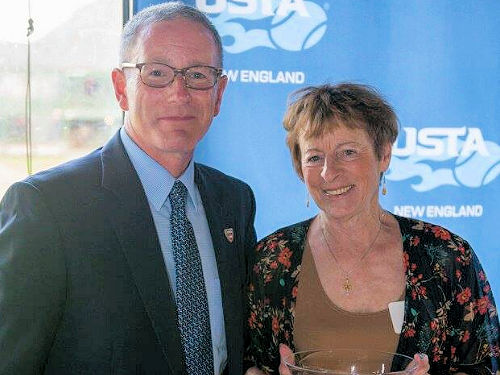 In 2016, Clare "Bunnie" Lahey won the Gardner Ward Chase Memorial Award for Lifetime Achievement. The citation read, "Bunnie has been an avocate for equality in tennis and growing the game at a grassroots level her entire life. Some of her early days were spent in Virginia fighting for women's rights to use the same courts as men. She has coached a no-cut high school team for 10 years - giving the opportunity for all kids to be part of her teams. In 1985, she founded the Lee CTA, which serves more than 100 kids and 200 adults each year throughout Berkshire  County. In 1992, Bunnie received one of her most meaningful awards to date, the National Eve Karaft Community Service Award  named after her mentor. Bunnie has also been an active member of either the USTANE or USTA WMA Board since 1991.

The Lee Community Tennis Association (Lee CTA) can trace its roots back to the mid-70's, when Bunnie Lahey, transplanted from a hotbed of tennis in Westchester County, NY, arrived in Lee with her husband Ed and four young children. The local tennis scene was dismal, with very few people playing on the local courts; however, the Lee High School Tennis Team had been started only the year before by Chris Hodgkins and Bob Lohbaur, joining the Berkshire County Coed High School Tennis League, bringing a ray of sunshine to the tennis scene. Their home courts were the two run-down weed-infested public courts at the local Athletic Field; however, another ray was shining upon the two beautiful red clay courts at the local Greenock Country Club (GCC), sitting dormant but fertile for more play.

Looking to build the fun tennis scene left behind in Westchester, Bunnie placed an ad in the local newspaper looking for others who may want to grow the game of tennis. This brought together 6 volunteers, who formed the Lee Tennis Association (LTA). These six men and women arranged with GCC to run a round-robin mixed league on Wednesday nights during the summer with one court of doubles and one court of singles. Those 6 players quickly drew in 20 plus other players; the adult leagues were launched, soon mushrooming into Men's Doubles, Mixed Doubles, and Women's Singles. Also, at this time, Bunnie contracted with the top singles player at LHS to give tennis lessons to her children and their friends at GCC, the seeds for the large LCTA youth program of today.

The LTA volunteers followed the guidebook for forming a community tennis association developed by the late Eve Kraft, a United States Tennis Association (USTA) staff member in Princeton, NJ. Eve was a passionate leader in making tennis available to all, inspiring others with her presentations at the annual USTA Recreational Tennis Workshops.

By the early 80's, the LTA had joined the USTA as an Organization Member, making it eligible for USTA Startup Grants of $50 to $150. This seed money funded the equipment, insurance, and salaries for new programs, including the National Junior Tennis League (NJTL) Chapter, Senior Drop-In, Introductory Lessons, and Drills. The LCTA was riding the wave of grassroots tennis promotion launched by the USTA.

In 1990, Bunnie earned her Professional Tennis Registry (PTR) certification at a week-long seminar at Hilton Head Island with Dennis Van de Meer. Maintaining those skills over the past fifteen years by attending PTR and USTA workshops, she has been able to expand the youth programs and introduce many new adult players to the game. As programs expanded, more instructors and coaches were needed. Both paid and volunteer staff have been added over the years. All the LCTA on-court personnel have attended the USTA Coaches Development Workshops and/or PTR certification clinics.

The LTA added the "C" for "Community" to its name when it incorporated in 1992 as a not-for-profit MA corporation. The organizers wanted to be sure that the LCTA's name portrayed that of a gathering of tennis lovers open to all, with the image envisioned by Kraft.

What is a CTA?

Within a year, two local attorneys, Dan Hunter and Alan Wolff, volunteered their time to apply for tax exempt status. The LCTA was proud to earn its designation as a 501(C)3 organization, easing the task of fundraising and adding to its credibility within the community. The CTA was modeled so as to provide low-cost programs to all ages, but in particular, subsidizing the youth and senior programs via income from the popular adult leagues. The local town and school governing bodies were quick to lend their support by allowing use of their courts and facilities for the LCTA programs. Other facilities were made available by local resorts, condominiums, and private owners. But the backbone of the LCTA Senior Programs continued to be the partnership with GCC, soft courts being vital for their enjoyment.

Within a few years, enough funds were raised to assist the town with the volunteer help of the local Kiwanis Club to completely rebuild the two public courts, repositioning them for proper orientation to the sun, improving drainage, new fencing, and adding a backboard.

The LCTA's consistent success since it was formed in the mid-1980s was recognized when Bunnie was awarded the first USTA National Community Service Award in the early 1990s and in 1992 when the LCTA was named New England CTA of the Year.

In 2000, when the schools decided to rebuild the high school and build a new elementary and junior high school, they were easily convinced to add six new tennis courts to the school campus. The LCTA funded the lighting of three of the new courts from monies raised over the years, primarily from auctions organized by volunteers Joe & Audie Furgal, contributions from members, with major contributions from Comalli Electric and a volunteer crew putting in many manhours erecting the poles and wiring. The lights were turned on in 2005!

During the 2005 season, over 450 individuals from throughout Berkshire County participated in LCTA programs, including adult leagues, youth programs, special events, tournaments, special olympics, and fundraising. There were 779 program registrations, some individuals registering in several different programs. Over the past 30 years, thousands have joined our healthy fun in the sun. Most families in Lee have undoubtedly had a member play, with many becoming "tennis playing families!" In fact, we even have some three-generational families.

June 2020: Lots has happened since 2005, including splitting theTennis Director contract into two positions: Youth Tennis Director & Adult Tennis Director! We're now in the process of adding an Administrator to assist the Executive Director, updating the website to conform with a new way of programming as we phase through the novel coronavirus pandemic.